On Sundays I like to force my wild mind into a more reflective mode, which is not always easy to do because, well, it’s wild. But I have a serious talk with it on Saturday night, and it finally agrees to settle down for Sunday and give me a break. I’m no fool, though, I know it's not giving in. I think it just gets exhausted from fretting and focusing on the wrong kinds of things all week that it, too, needs some rest.
So here it is Sunday and being that it’s nice and quiet inside my head, I have a chance to think about all the great things that surround me every day, things I sometimes forget to notice when I’m trying to get the print version of 44 perfect or attaining my daily word count goal (ha!). Things like an amazing family, one great giant lion cat, blue skies, warmer weather, juniper trees, a million shades of green in bloom, baby deer, kayaks on the river, hiking down a dusty trail in the afternoon sun.
I hope wherever you are, you’re having a great Sunday, too.
Jools 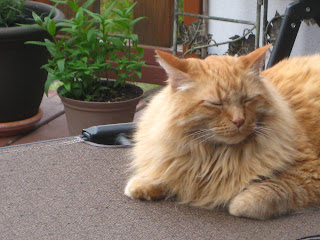 Seeing and Not Seeing....

There is some pretty darn exciting news here in Bend this week….Today, Pilot Butte Drive-In is opening a second branch on the westside!  A landmark in Bend since 1983, the restaurant makes amazing hamburgers, ultra-delicious breakfasts, and great shakes. But because it’s on the other side of town, I don’t get over that direction too often and don’t eat there as much as I would like to. That’s why the excitement…because I’m ALWAYS in the direction of the new location!
44 fans probably remember that Pilot Butte Burgers is mentioned in the book. It’s the place where Jesse and Abby stop for a quick bite after school.
When the fam and I lived on that side of town, we went to Pilot Butte Drive-In quite a lot. It was when we had first moved to Bend and lived on 27th Street. If you’re not familiar with Bend, let me just mention that 27th Street is humorously referred to by realtors as Highway 27. And they aren’t exaggerating. It’s one of the busiest streets here, four lanes across, with speed limits of 45 for most of the way. It’s a nice road to take if you’re driving, but not so nice if you’re trying to live.
This last part, the part about living, came to me just a little late, about an hour after we signed all the papers and I held the key in my hand. Armed with teal and Santa Fe pink paint cans, I walked into our new home shocked at the constant traffic noise, which penetrated every single room, including all the bathrooms and closets (where I might have tried to hide for a moment of peace).
But the thing about that house, though, was it had the most incredible views. The view out our master bedroom window was absolutely breathtaking. Seven beautiful, amazing, inspiring snow-capped mountains stood in the distance out that window.

I still remember dancing around that crazy house the first time we were inside, swimming in those glorious views. I heard absolutely nothing but the pounding of my heart in love. I didn’t hear the Safeway trucks speeding by, or the motorcycle club which loved that stretch of road, or the crazy high school students peeling out of school for lunch. All I could hear was the pristine and serene snowy mountains that I couldn’t stop staring at. Love, I suppose.
I guess there were a lot of lessons learned from the house on the highway. Or at least, I hope so. One of them was that sometimes you don’t see things, even when they’re right in front of you. This is a common theme, I’ve noticed, in my writing. And if you’ve read 44, you’ll know what I’m talking about. 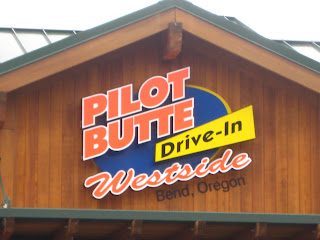 So anyway, if you're in Bend, make sure to stop by Pilot Butte Drive-in, east or west side, for a delicious meal.
Hope you are having a great week!
Jools
Posted by Jools Sinclair at 4:33 PM 2 comments: